St. James Gold Corp. (TSX-V: LORD) (OTC: LRDJF)(FSE: BVU3) the “Company” is pleased to announce the appointment of its technical advisory team and formation of a technical committee in anticipation of upcoming gold exploration activities on its option on the Florin Gold Project in the Yukon Territory, Canada and its projects in Quinn Lake and Grub Line located in Newfoundland and Labrador, Canada. In total, these two team members alongside our VP of Exploration, Stewart Jackson and the three members from the Florin Gold Project’s technical team, bring over 100 years of exploration and mining experience. These appointments represent a key advancement to overseeing drill budgeting in the Yukon and Newfoundland as the Company prepares for an active 2021 exploration season.

The Company’s technical committee will consist of the below team members.

A Qualified person under NI 43-101, Mr. Barde graduated from the University of Geneva, Switzerland with both a M. Sc. and B. Sc. in Geology. He will be primarily tasked to assist the Company with its exploration activities in the Yukon and provide support for its Newfoundland assets.

Peter Stokniki, MESci, as a Geological Consultant, is a geoscientist with a background in exploration geology and geophysics. He brings experience in fieldwork related activities using multiple geophysical techniques, data processing and GIS, and geophysical inversion of TMI magnetic data. Peter has international experience in geospatial analysis, geochemistry and QA QC of analytical work, and the building of geological models and processing of geophysical data.

Peter holds a Master of Earth Sciences in Exploration and Resource Geology from Cardiff University, UK and has studied. His research expertise includes geoscience investigations of Platinum Group Elements mineralization in mafic-ultramafic rocks in Lapland (Finland) and on epithermal gold deposits in Andalucía, Spain. His recent projects include geophysical investigations in the UK and gold exploration projects in Ireland and Canada.

Part of St. James newly formed technical committee will be the addition of three members from the Florin Gold Project’s technical advisor team. These members are as follows:

Mr. C. Coe has over 35 years’ experience in the mining industry working primarily in Arizona, Nevada and the Yukon and has put two mines into production in the past.

Mr. C. Coe is a Professional Geologist, Mining Engineering Technologist and Gemologist, holding a Bachelor of Science degree in Earth Sciences from Simon Fraser University and a Diploma in Mining Engineering Technology from the British Columbia Institute of Technology. He is a member of the Association of Professional Engineers and Geoscientists of British Columbia (APEGBC), the Northwest Territories and Nunavut Association of Professional Engineers and Geoscientists (NAPEG) and the Association of Applied Science Technologists and Technicians of British Columbia (ASTTBC). Mr. C. Coe has been a director and/or officer of several successful public mining companies and previously was a fully licensed Investment Advisor and branch manager of a national brokerage firm.

Al Doherty is the principal of Aurum Geological Consultants Inc, a geological Yukon focused consulting firm in operation since 1984. Mr. Doherty has expertise over the past 4 decades on the Clear Creek area in regards to Reduced Intrusion related gold systems, Antimony Mountain, Mike Lake, Ida-Oro and Panorama Ridge. Mr. Doherty has had two tenures as President of the Yukon Chamber of Mines and served as a Director of the Prospectors & Developers Association of Canada (PDAC) from 1996-2005, and was a board member for the Yukon Minerals Advisory Board. Mr. Doherty has organized and lectured the Yukon chamber of mines basic and advanced prospecting courses from 1988 to 2018. Mr. Doherty was involved in the steering group that formed the Yukon Mine Training Association beginning in 2005 and has been active as a board member to 2010 and served as the board Chair for two years. Mr. Doherty has also worked extensively with noted prospector Shawn Ryan from 2000 – 2011 as well as numerous junior exploration companies in the White Gold district and throughout the Yukon. Notably he worked with Underworld Resources during the initial early exploration phases at White Gold and was the logging geologist who noted the first visible gold in drill core.

Mr. Doherty has extensive experience with regional geological mapping having previously been under contract with the governments of British Columbia, Newfoundland and Labrador and subsequently managing and working on regional geological mapping under contract to a Canadian federal agency over parts of Whitehorse area. Mr. Doherty worked for AGIP Canada Limited in the North West Territories and the Yukon as a project geologist during the discovery of the Mt. Skukum epithermal gold-silver deposit in the Wheaton River valley. International experience also includes consulting work in Alaska, Nevada, China, Brazil, and the Philippines. Mr. Doherty has held both senior and management and director positions with junior exploration companies and has authored or co-authored numerous NI 43-101 reports. Mr. Doherty holds a BSc. (Honours) in Geology from the University of New Brunswick (1977) and has been a registered Professional Geologist APEGBC since 1993.

Mr. R. Coe has over 20 years of experience working in mineral exploration. As the founder and president of Fox Exploration Ltd., he has presided over a number of exploration projects across Arizona, British Columbia, the Yukon Territory and Nunavut. His expertise encompasses a range of exploration activities from initial land acquisition and grassroots evaluation to drilling advancement and site reclamation. He currently sits on the board of a publicly traded company and is also the founder or co-founder of several privately held companies that span across multiple sectors including digital media, health and wellness, apparel, residential development and mining. Mr. R. Coe holds an MBA from University Canada West and a B.Sc. from the University of Victoria.

As stated by George Drazenovic, CEO of St. James Gold, “St James Gold’s recent acquisitions and ongoing drill-target generation for 2021 field season will benefit from the technical expertise of our technical team members. With over 100 years of exploration, knowledge and experience in leading international and domestic exploration programs, contract negotiations and procurement, we are delighted to bring Bruno to St. James Gold Corp. His experience will be invaluable as we look to leverage our assets and bring value to our shareholders.

We are also excited to bring Peter’s expertise and have him add to the skill set already assembled within the present technical team. He will be tasked with building the geological database and model for the company’s current exploration mineral assets and new acquisitions and be involved in the day-to-day fieldwork activities including the supervision of core logging and sampling, acquisition of data and data verification for resource modeling. As part of building a technical team at St James Gold Corp., the company would like to welcome Peter Skotnicki as in-house Geological Consultant.”

As stated by Dr. Jackson, VP of Exploration, “I am excited for the opportunity to work with the newly established advisory team and committee, and to utilize their breadth of experience in resource projects and public companies, particularly as St. James Gold ramps up its activities for the upcoming exploration season.”

The Company’s option on the Florin Gold Project remains subject to TSX Venture Exchange approval and further details on the option are disclosed in the Company’s news release dated April 6, 2021 (a copy of which is available under the Company’s SEDAR profile at www.sedar.com). 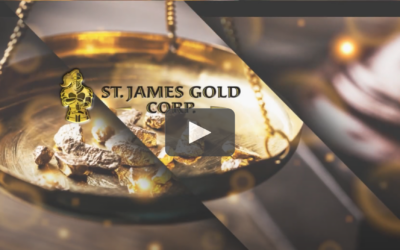 St. James Gold Corp. Announces Appointment of Stewart A. Jackson, PhD. to the Management Team and Role of Vice President of Exploration